Convert between XML and JSON documents and schema

The image shows the Graphical XML Schema (XSD)Designer displaying the 'Bookstore.xsd' sample, which is provided as part of the default project in Liquid Studio 2017.

As you can see, it has a convenient split view screen showing both the logical (Design) and physical (Source) views of the document. 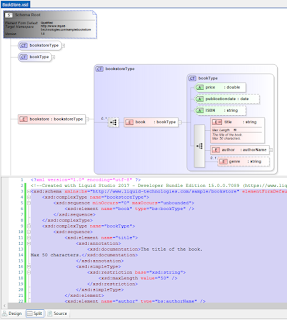 The right click menu has the option to 'Create Sample XML from Item. You can also use the main Tools menu.

Selecting this menu option runs a Wizard which allows you to configure how the tool should create the sample. E.g. You can choose how optional items are handle, choose to ignore errors, and select which namespaces are used.

When the tool has completed, the new XML document is displayed.

Again a split view is shown and you can choose to display just the Graphical Design view, just the Source text view, or a split view showing both. 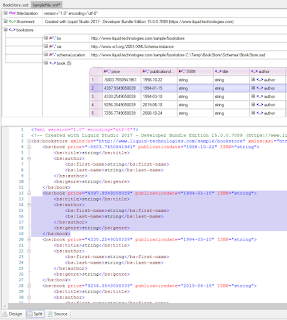 When you have an XML document open, you can select the File->Export As JSON File option.

This will display an export JSON dialog allowing you to select how the JSON file should be saved. 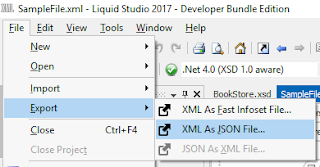 You can then open the new JSON file in Liquid Studio 2017.

The JSON file is displayed in Source form and the editor provides formatting functionality, collapsible regions. 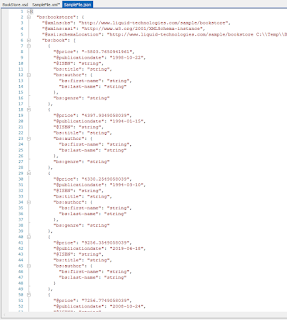 When you have a JSON document open, you can select the Tools->Infer JSON Schema menu option. This will display a dialog allowing you to set option regarding how the JSON schema should be created.

The new JSON Schema is displayed in the graphical JSON Schema Editor. This has the options to view a split screen showing both the logical and source views. 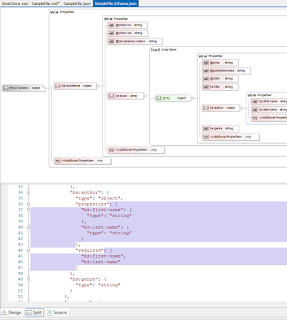 We have provided a brief overview of the tools available in Liquid Studio 2017, but several other conversion utilities are also included.

Download a free trial of Liquid XML Studio to experience the full functionality of these tools and much more.

Posted by Liquid Technologies at 4:37 PM

The following page then allows you to select the version and EDIFACT or X12 schema you wish to use.

The final page allows you to select the options used to parse the EDI documents.

You can again select the EDIFACT or X12 schema you require along with the options used to write the EDI documents.

You will then see EDI Reader and EDI Writer components are added to your Liquid Data Mapper canvas. You can now start to map the fields, adding transformation components as required.

E.g. The following shows a simple Upper component which will convert the incoming data to upper case:
﻿ Many other components are available to transform your data. These can be seen in the Component Palette, and are grouped into various categories.

You can download a free trial of the Liquid Studio 2017 - Data Mapper and test out the EDI data transformation functionality for yourself:
https://www.liquid-technologies.com/trial-download

Posted by Liquid Technologies at 4:20 PM

With the release of Liquid Studio 2017 we will see new functionality allowing you to test RESTful Web Service. 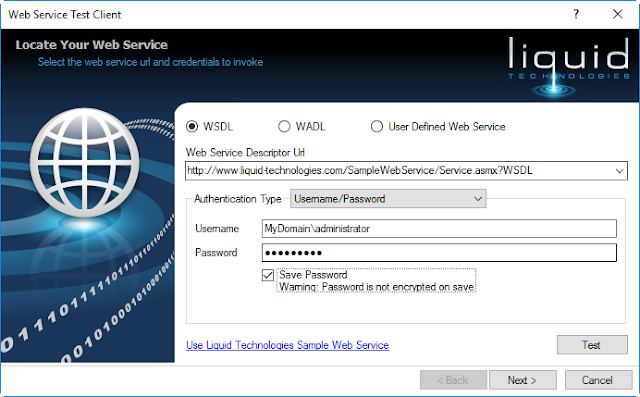 Liquid Studio 2017 now supports using a WADL (Web Application Description Language) to describe the Web Service. If you don't have a WADL, you can easily create one using the new User Defined Web Service option. 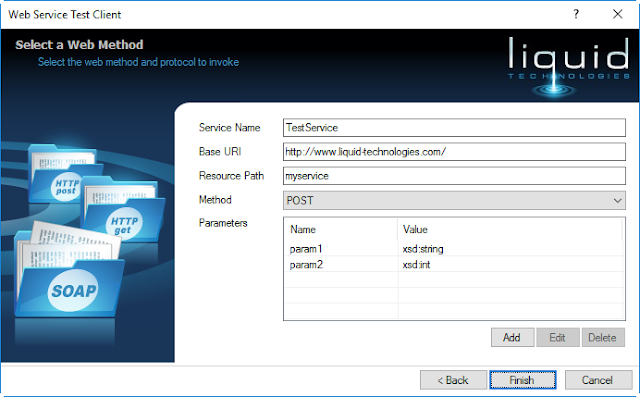 The User Defined Web Service option provides the ability to describe a Web Service Call by entering a Service Name, Base URI, Resource Path, Method (GET or POST) and Method Parameters. This is then saved as a WADL file for future use.

This is just one of the many new features in Liquid Studio 2017. Please feel free to try out the BETA Test version.

Posted by Liquid Technologies at 10:50 AM

We are pleased to announce that we have embraced StackOverflow as our community support platform.
StackOverflow is a great platform for sharing knowledge and by posting your questions you are helping us build a rich community resource that is both comprehensive and easily accessible.


If you have a support query that fits within the Q&A style then please post it on StackOverflow using the tag 'liquid-xml'. Our support team will actively monitor this tag and will respond ASAP.

If your query involves proprietary information or license keys, then you can still raise a private support ticket, but where possible we would like questions to be visible to the community so everyone can benefit from the answers.

Posted by Liquid Technologies at 3:07 PM

We are pleased to announce the Liquid Studio 2017 BETA is now available for download from the BETA Download page:
https://www.liquid-technologies.com/beta-download

New features for 2017 include:

Posted by Liquid Technologies at 3:12 PM